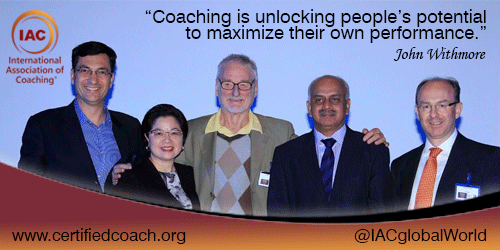 I [Philip Beddows ]have written in a recent book about the intriguing fact that two people from completely different parts of the world, with separate cultures can often be more in tune with each other, better connected, on the same wavelength, than two siblings. There is much to be gained when one invites and seeks the possibility of connection when meeting people, because the world is a much smaller, more interconnected place than many may imagine.

News of the recent death of Sir John Whitmore, one of the fathers of coaching, led me to reflect on the first time I had lunch with him. He asked me what my plans were for the weekend – his question invited possibility and with his reaction to my reply, a moment of serendipity struck. It seemed that we found we were connected in more ways than we could ever have guessed – way beyond the confines of coaching, into the realms of family, place and history. We talked from midday to early evening while lunch ran into tea and an early evening drink. The range and depth of our conversation was extraordinary, and it was conducted in full ‘flow’ – Mihaly Csikszentmihalyi would have understood. We were to enjoy other lunches, long walks in the countryside with wonderful conversation, and time shared on a conference trip to India.

I [Philip Beddows ] remember attending a coaching event years ago, billed as a demonstration of coaching by John. By the time John had finished, some recently trained coaches, expecting to be shown ‘how to coach’ were confused about what they had just experienced. It certainly wasn’t a demonstration of coaching. What John delivered was a master-class that took his audience far beyond the mechanics of coaching and provided deep insights about our humanity and the extraordinary potential within each person. He connected coaching with personal and global contexts, leaving his audience with a prophetic rallying cry for action about the meaningful value coaching can bring to society.

The world of coaching will be lucky if it ever sees another person of Sir John Whitmore’s standing – he was a giant of the profession, although he spoke modestly about being called the father of coaching and expressed a keenness for others to step forward and lead coaching onwards. There’s our challenge. What will we coaches do to cherish and build on his legacy.

Philip Beddows is a leading Executive Business Coach and Mentor based in London, and a member of the IAC’s Board of Governors. He has been coaching for 26 years, is a Founding Partner of The Silk Road Partnership and a Founding Fellow of the Institute of Coaching.

Looking to connect with IAC® ?

The IAC® is a community of progressive and diverse coaches. With coaches from 80 countries, and even more languages, from all walks of life, you’ll have no trouble finding a coach or colleague you can connect with. If you are a client, this is a great way to find the most masterful coaches in the world! *