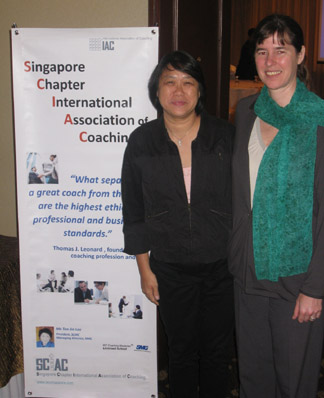 The Singapore Chapter of the International Association of Coaching (SCIAC) held a talk on September 4th 2010 at the Furama Riverfront Hotel Singapore. Our keynote speaker, IAC Immediate Past President Ms. Angela Spaxman, was present to share her coaching experience and also to introduce the IAC. The topic was "Putting the IAC Coaching Masteries® into Action," and included a question and answer session that garnered insightful discussions. It was a fruitful session with good feedback from attendees—such as HR and business managers from Multi National Corporations (MNCs) and experienced business coaches seeking to gain a clearer understanding of the Masteries®. The discussion touched on how organisations can drive a coaching culture through the use of the IAC Coaching Masteries®.

Some key discussion areas were:

We will continue to strive for coaching best practices and to drive a coaching culture throughout organisations in Singapore in order to promote the IAC Coaching Masteries® in Singapore.

Jin Lee is the Managing Director of SMG Training Systems. She has been working with numerous Multi-National Corporations and local companies across the Asia Pacific regions—coaching, training and consulting their leaders through key transformational and change initiatives. She was one of the Woman Entrepreneurs of the Year in 2001.